[Revelation Online Seminar] Chapter 16, Have you ever heard of "Armageddon"?

[Revelation Online Seminar] Chapter 16, Have you ever heard of "Armageddon"? 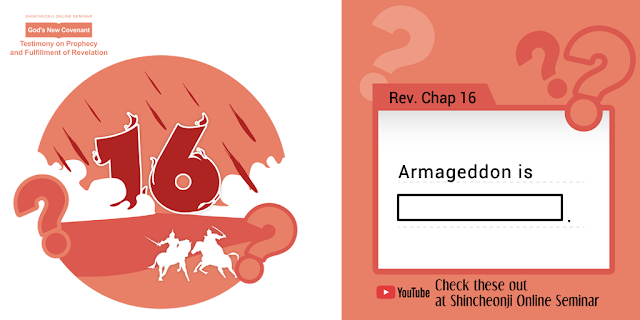 Have you ever heard of "Armageddon"? Armageddon refers to 'Mount Megiddo', where the Israelite people fought many wars during the Old Testament era.

Perhaps that's why Armageddon is often depicted as the final war or the end of the Earth in films and novels.

In addition, Armageddon is the location where Satan gathers his kings to fight a war against God in Revelation chapter 16.

Some people say Armageddon refers to the actual Middle East and interpret the war of Armageddon as a world war or a nuclear war. However, as you know from the previous seminar, the war in Revelation is not a physical war fought with guns and swords.

Then, whom and who fights this war of Armageddon in the Book of Revelation? What do we have to do to follow the will of God in this war to gain salvation?

The secret and reality of the war between God and Satan, the War of Armageddon, will be revealed!