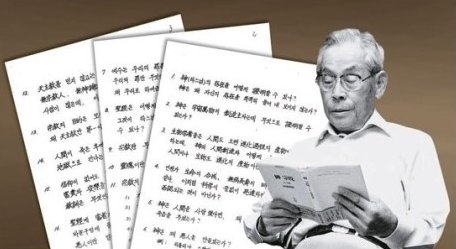 Korea JoongAng Daily published an article on December 17, 2011, which listed a series of questions the late founder of Samsung Group, Byeongcheol Lee, asked about religion. The bold-print, front-page article has since drawn much attention within Korea because Mr. Lee had sent his 24 questions concerning religion to a catholic priest one month before his death.
The world is now paying close attention, not only because these questions were asked by one of the world’s leading businessmen, but also because no one has been able to properly answer them within the last twenty-four years.
The following article provides clear and definitive answers to Lee’s 24 questions about religion. 33 years have passed since these questions were asked, but the answers are finally being proclaimed to the public. Now people throughout the world can finally find the truth they have been seeking.
Religion and the mindset of the world
There are two kinds of entities in the spiritual world. Of the two, I respect God and those who belong to Him. In the physical world, I would like to acknowledge the Buddha, the eastern prophet Nam Sa Go, the Buddhist monk Seongcheol and Samsung’s Byeongcheol Lee because of their honest intent.
Just as the Buddha questioned religion as he agonized over life, Byeongcheol Lee also asked questions about religion in emotional distress as he faced his death. Yet neither had the ability to answer their questions. The Buddha and Nam Sa Go could only speak about what they knew. Before we talk about God, we must first understand the origin of religion. Who can answer questions such as these correctly (1 Cor 2:10)?