On 27th of Jan., 2019, About 100 organizations held "Press conference and Rally to Call for the Shutdown of the Christian Council of Korea (under 'CCK'), an Anti-Nationi, Anti-Society, Anti-Religion, and Anti-Peace organization".

The host is Global citizens human rights coalition to call for the shutdown of the Christian council of Korea.

The reason to crowd is to call for shutdown of the Christian Council of Korea (CCK) because they lost the religious role.

Maybe If you know their reality of CCK, you will sympathize with the words.


1. CCK have judged the people and then do coercive conversion program to change religion for the name of God's work.

As a result, many people had lost their life and the case is increasing now.
Do you imagine to kill people because of religious difference?
I couldn't be understand because religion is freedom. if it is different, we could explain why you change the religion but it must be forced regardless of individual's will.

Even, Last year Ms. Gu had dead because of coercive conversion program by CCK.
As well as I was shocked Ms. Gu had asked to make law to protect her after 1st kidnap but Korean government did non-response, the reason is problem of religion.

If it's doctrine between religions, I could understand Korean government's stance.
But It's not doctrine, the person had dead and it's not ONE PERSON.

If the person had dead, the reason will not be reason. no matter what.

2. CCK is a Cult not to believe God, they are an interest group.

I will explain the origin of CCK from Korean early church and commonly called 'CCK'.
Articles of association of CCK indicates to be established by showing their voice to government or society. It's proved CCK is an Interest group, NOT religious group.
So that CCK is Cult.

1) CCK insists to believe God but they had conciliated people to worship Japanese shrine as well as dedicated the church's to Japan during the Japanese colonial rule. It is same period of World war II. The Gosin group separated opposing the shrine is a witness. 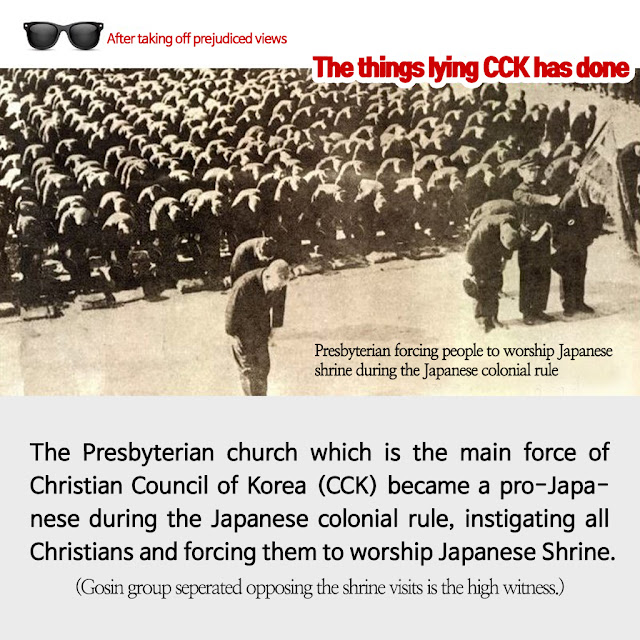 2) CCK supported the Constitutional Amendment which is illegal of democracy for the Third Term although many peoples opposed. And then they had killed too much people for the purpose 'Cult Purification'

There are too much reason to call for the shutdown of the Christian Council of Korea(CCK) except for above two reason. I will let you know why many people and organization are shouting to shutdown of CCK.

We have to concern it to make better world without threat of human rights by wrong organization which called 'Religion'.